SHE IS AWESOME AND WONDERFUL – and A PROMISE AND A HOPE 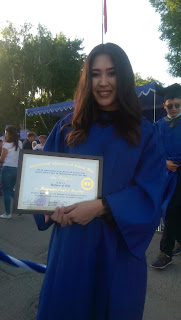 Aima came into LAMb International Jeremiah 29:11 program from an orphanage south of Tokmok.   She entered IUCA and studied well.  Her desire to succeed was evident from the first day she arrived!  She is  a survivor and full of resilience.

At IUCA she stepped up in many different competitions – one competition was to apply for a scholarship program to study in Russia.  She won this competition and we sent her (thank you sponsor) on to Russia to complete this honor. After the study program was completed, she went to work for a summer in St. Petersburg and returned to IUCA at the end of the summer to complete her education.  She graduated with her Bachelors Degree in 2018.  Not what was next?

Her dream was to be a flight attendant.  She applied to two major international airlines and won interviews with both.  It was her dream to work for one airline in particular.  After a number of interviews - she has been hired.   At this time she is in process of completing the final steps to start her training for that airline, which will begin on September 15.

Yes, she is a new candidate for Emirates Airlines.   Two months of training and then flight time t learn - you will then see her in the air!

This young woman is a solid example of Jeremiah 29:11.  She is a promise and a hope!  She is designed for a purpose. We praise Him that we had the opportunity to be a stepping stone in her life.

Shall we say this beautiful and kind young woman is on a pathway to what she has been created for!  We were just a little stepping stone along the way.  To Him be the glory and to Aima be the respect for her desire to go forward and not remain in her past.