SERVICE ON THE SILK ROAD CONTINUES...

WE HAVE POSTED SO MANY TIMES ABOUT DASHA'S ADOPTION thinking it was going to be final any day.  Then each time adoptive mom and our LAMb Social Worker would go to court another obstacle would be brought forward by the judge.  We have had to produce countless papers about her father that passed away, bring her mother in to sign about the father (to find her sober long enough to do this) ensure her older brother would approve (and he had never shown any interest in her - except to ask if we would pay him to take her!), prove again and again that adoptive mom was serious and more.

We felt strongly this was just an attack against the adoptive mother, since she had four other children.
THEN WE SAW THE HAND OF GOD
An incident where a woman fell on the ground in front of our adoptive mother - she picked her up and helped her brush off.  In the dialogue that followed, it was discovered this was a Deputy of the region.  Mom told here story and the Deputy said - "Let me take care of this."

You see a deputy has more authority than a judge.

AND THE REST OF THE STORY?
New court date sent - April 10, 2017.....ended up being April 11.
AND THE RESULT?
WELL TAKE A LOOK AT THE ADOPTION PARTY!  IT IF FINISHED AND WE CELEBRATED BIG TIME WITH THE FAMILY!

DASHA IS A DAUGHTER
HER MOTHER IS A PASTOR AND MOM TO FIVE CHILDREN
SHE HAS THREE BROTHERS AND ONE SISTER
and the family cow - Joyce! 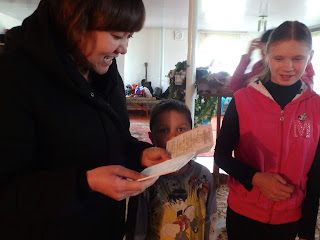 The pictures look lovely and all of you look so excited about this venture. It is a divine act to take patronage of orphans. May God bless the family for their deed!