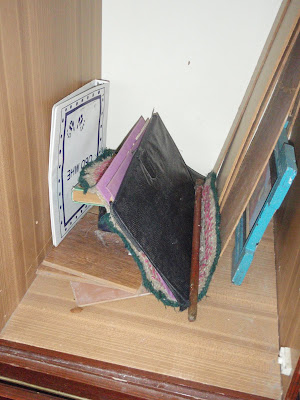 My heart just dropped to my knees when we visited Slavik's grandmother Galena today. First, his uncle Volodymre was there and he was sober. Grandmother was eating and she really looked good considering she had just had a stroke not long ago. She still cannot talk clearly, however Anya was able to pick up some words and write to her on paper to help her understand us.

His sober uncle was willing and able to give us some detailed information. He knows about where Slavik is working in the field in Kazakhastan and when we talked about sponsor funds available for helping him when he returned to Kyrgyzstan - he began to have ideas of how we might contact him. The uncle agreed to talk to a person he is sure has the phone number of the man who took him (bought him?) to Kazakhastan. He took Talant's phone number and said he would call Talant with this man's number and then a plan could be made to bring Slavik back to Kyrgyzstan. This is huge progress as nothing else has been as encouraging up to this time. We really had not idea of exactly where he might be. This seems very hopeful.

The grandmother said she really wants to know where he is as well. I really believe she is grieving over him not being there and does not understand what is going on. Remember he was living with her up until the stroke. And the proof of him there hit me between the eyes.

I looked up into this cupboard of sorts while we were comforting the grandmother and my eyes stopped at a clear reminder of Slavik and our time together. There in this cupboard was a white and blue book with the title "ABOUT ME" in Russian. It was a Life Book. We had these made in Cleveland, Ohio for the children at the orphanages in Kyrgyzstan. Slavik made his life book, choose a baby picture from the many pictures sent to us from families (one he felt might have looked like him as a baby) who had adopted Kyrgyz child and put the picture in the book. He filled out pages about his favorite things and what he dreamed about in his future.

THERE WAS HIS BOOK - Where is Slavik? We pray he will soon return to Kyrgyzstan. Maybe his family cannot keep him, nor perhaps should they be permitted to keep him, maybe he won't want to be helped. Yet we cannot just MOVE ON WITHOUT STOPPING FOR HIM.